I was re-potting a fig in the summerhouse this morning, the outside temperature was 5 ºC I was dressed for summer in a pair of joggy bottoms, a flimsy t-shirt and a pair of ADIDAS sliders with stripy socks, yes I did look a sketch. I didn't intend to stay out for longer than 5 min. From inside the shed I could see Carmen getting the car out the garage I also saw her driving away, she had an appointment to see the podiatrist at 10:30, five minutes later, I made my way to the house only to discover she had locked the French doors and had put the crook lock on the handles for good measure. I was livid. What am I going to do now? The stupid bitch has locked me out, I looked through the kitchen window, no key in the back door meant she had locked it and taken the keys with her, my key was in the front door and locked. The garden gate is pad locked I could put a chair up against the wall and climb over it but what's the use, my mobile and money are indoors I can't walk to my mothers for the spare key, Thursday is her social, she won't be in, I'll just have to sit it out in the shed and that's what I did, for 2 and a half hours! 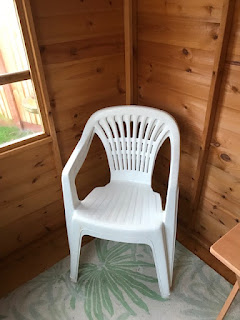 What did you do to amuse yourself I hear you ask? I sat in this chair and after a while I got up and sat on the stool. NB The above plastic chair was left by the previous owners of the house.
I was so cold I took the fleece bag off the Brugmansia made a slit in it for my head and sat there with it on. Finally, after an age I heard the car pull up the drive, it was Carmen, her jaw slackened when she saw me through the metal gate, still wearing the bag and looking like something from Wizbit. She said she called out to me, to say she was leaving and could have sworn I had answered her. There was a pause, then she said 'Do you think it was stone tape theory?' That's when the air turned blue.
Posted by Mitzi at 20:32